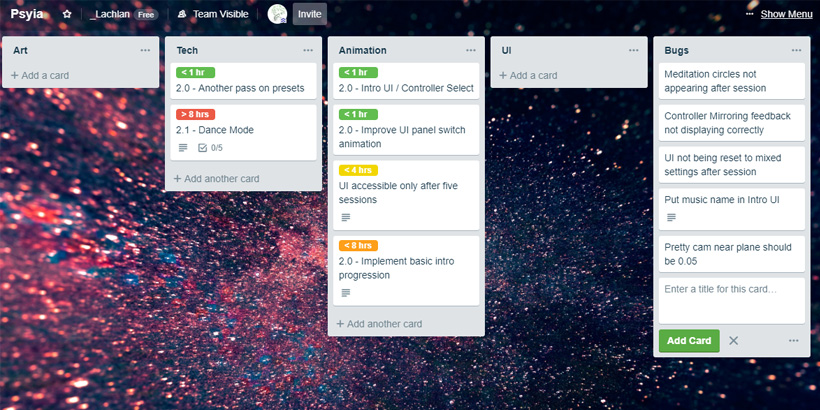 After a fourth failed attempt at completely rewriting Psyia, I am officially calling it quits. It sucks, but I’ve failed to turn the initial creative experiment of GPU Cubes, built three years ago into a viable VR product. I don’t think I’ve ever really failed at anything that I’ve tried my best at before, so it’s a strange and upsetting thing – but in some ways quite liberating. If I can try my best, fail, and come out of it wiser, then there’s no reason not put my all into everything I do!

The reasons for my failure are complex and interwoven. I did my best to explain it in this twitter thread. Psyia has been holding me back through guilt, shame and anxiety for a long time. I’ve always had to do battle with occasional long bouts of depression, and that was definitely part of the emotional clusterfuck that has become Psyia.

But I’m actually feeling pretty good! Over the past two years I’ve created a huge list of achievable, interesting experiments I’d like to work on but haven’t because I felt that it was irresponsible to work on anything but Psyia. I feel like now I have the freedom to get stuck in and start creating again.

If you are one of the few people who remembers Psyia and was looking forward to it coming out, I’m sorry for letting you down. I really, really tried. But there’s some good news!

Despite never reaching a point where I considered it ready for a public release, I do have a string of working builds that I’ll upload for free on this site. I’ll upload all the builds I have over the next few days (my upload speed is terrible). The builds I recommend trying if you enjoyed the original GPU Cubes demo are:

I’ve also open-sourced both Psyia repositories (1.x and 2.x) in case anyone can learn from them. I imagine full project repositories for closed-source VR apps are pretty hard to come by, so hopefully that’s a useful resource for somebody. The repository links are here:

Note that I’ve had to remove some of the music in the repositories as I had permission to use it in the app, but I imagine the artist would be less keen on me publishing .mp3s on GitHub for free.

So that’s it! I’m not going to work on Psyia anymore. You can expect to see a lot more interesting creative work being posted here in the future – I have a lot to do!

I’m sure if I look through the notes I’ve been writing for the past 18 months, I’d remind myself of all the other projects I’ve had on the backburner.

So, apologies for my absence, everybody. Sorry for not finishing Psyia. I’ve learned my lesson in regards to being indecisive about whether a project is a creative exploration of a product. I won’t make that mistake ever again.