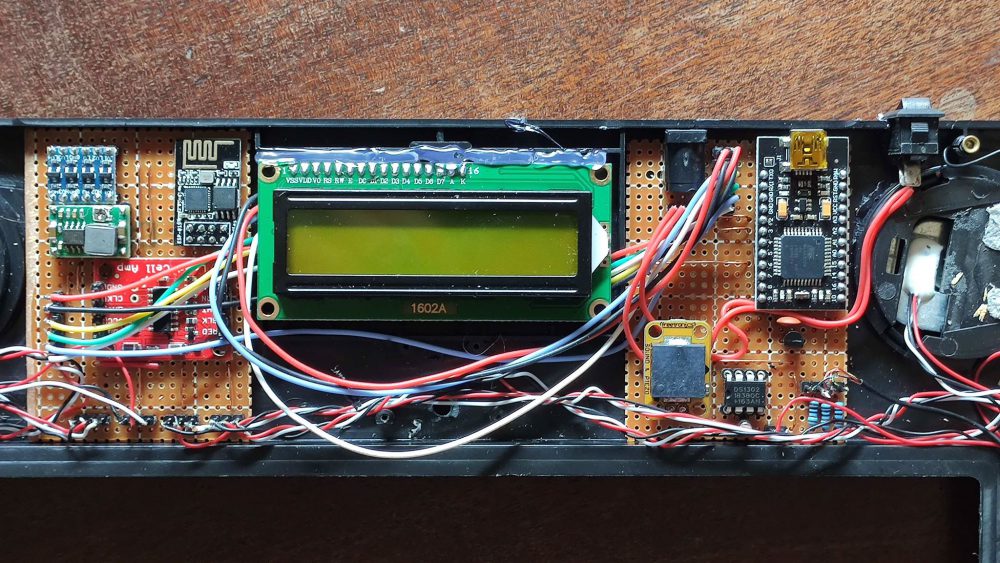 Like I mentioned in my previous, catch-up post, the main thing I’ve been doing with my spare time for the past six months has been hobbyist electronics!

Part of the reason I got into VR in the first place was a desire to make magical, impossible things that could be directly experienced. Something I kind of always wanted to be able to do to serve that end was to make those magical objects real through embedded electronics! Unfortunately, learning electrical engineering is a little more complicated than learning to code, so that wasn’t where I ended up. But I never forgot about it!

In July last year, on a total whim I decided to dust off an Arduino kit I bought ages ago and try to do a little probing of a digital scale I had in my apartment to see whether I could the readings into Unity. I failed horribly, which lead me to do a bit of research into what I might need to not-fail-horribly. I bought a few little pre-made electrical modules and ended up with this monstrosity:

It worked! A very rare and precious sense of extreme triumph was felt that day! So I decided to build my own scale from scratch to mimic the data output but in my own, custom form factor.

There’s something about having made something physical from scratch that runs code that I wrote that I find immensely satisfying in a way that I don’t quite get from programming. One thing led to another, and I bought more and more bits and pieces to improve my repertoire of components. Now I find myself with a nice little electronics workshop!

Some of the other little bits and pieces I’ve worked on:

The main two additional projects I’ve done are an awesome Alarm Clock Scale (that I’ve named Maat) and what right now I’m calling the PowerBox. The Alarm Clock Scale is enough of a project that I’ll make a separate blog post about it.

The PowerBox is actually something I’m working on for my current VR project – it’s basically an eight-channel relay in a nice enclosure. It will let us control up to eight normal AC appliances via Unity to create a multi sensory VR installation space. It has two AC inputs so that the total power output of the box is 20A.

Because it’s the first thing I’ve build that uses 240V AC power, I’m being suuuuper careful with how I build and test everything. All the connections are heavy-duty electrical connectors and there’s no exposed wire anywhere. High voltage AC actually kind of scares the hell out of me, which as I understand it is the appropriate response!

So that’s been fun! My work on the electronics side of things has slowed down a little lately, mainly because the next thing I want to work on actually requires a pretty decent chunk of design work first which is still underway.

But that’s where I’m at so far!